Aaaaaaah! I enjoyed my last blog soooo much that i must share another craziness. Accidentally its another vegan stuff – without any purpose i promise. ITS JUST SOOOO MUCH GOING ON NOWADAYS IN THE GREEN N HEALTHY GASTRO WORLD – innovations followed by more n more f😁cking interesting stuff and it makes my brain just working all the time. Lovin it. Sooooooo

Have u ever heard of ‘aquafaba’? I m not blaming u if not – neither have i till the last month. I visited one of my most beautiful vegan friend, Zsuzsika and showing her a super n also very creative sweet silken tofu trick when suddenly he asked me if I met ‘aquafaba’ before…. Luckily i know now.

‘aquafaba‘ basically nothing else but legume liquid. U get all those cans with beans and chicpeas or any different legumes cooked in water – after this post u ll think twice before u rinse your beans in the sink. 😊

Apparently this liquid is the cheapest and best egg replacement ever. If u want details just check the Wikipedia link above – i didnt want to believe. Luckily I have a whole kitchen behind me so I decided to experiment a little.  Bit. (my other vegan KP friend was sooooo happy about it of course). And I dont really need to go faaaar cause we just put some amazing smoked humus on the menu so using quite a lot of chicpeas from cans…

Ok. So I’m gonna be very honest – as a pastry chef would be. I won’t make it up, or make it look better as it is. ‘aquafaba’ is not egg. Not white and especially not yolk. But we can make a couple of trick with it. 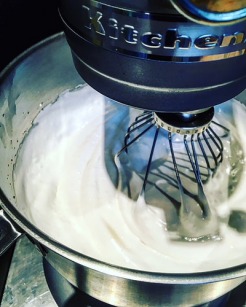 Get your tin of beans, strain the liquid, measure into your mixer and measure the same amount of sugar what u add slowly (it might work if u add the whole thing at once, I never tried to be honest) while turn on the mixer to whip your ‘aquafaba’. It will take a couple of minutes – between 10-15. And the magic will happen in front of your eyes. Slow start but gorgeous ending. Stiff meringue. And tasty. Just whispering that I love the flavour of this vegan stuff more cause u feel nothing from the legumes and obviously nothing eggy like a normal meringue. Just great. The texture is different, less silky but more foamy ( like your bath ). Not shiny like an Italian or Swiss meringue and doesn’t keep its shape so well as time passes.  In the restaurant I can use it for one service before it starts to separate the water from the solid part. BUT u can re-whip again and small amount makes a lot (just like normal meringue). Other blogs sayin that u can dry it out like a pavlova – havent tried yet. But I did try to blowtorch it and u can. As the flame reaches the surface of the foam looks quite weird = like how water waves in the ocean. Like a living creature. Cool. 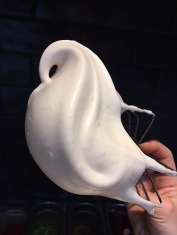 Well, I need to repeat my very good vegan friend s opinion about this = “I ve never had anything like this before in my life, just so awesomely good”

No need atom physics kind of knowledge for this chapter neither. Just make your meringue as u did at the previous part, meanwhile melt the same amount of dark chocolate as your sugar or ‘aquafaba’ part was (1:1:1). When u think your meringue is ready – get your ball from the stand mixer and fold your melted chocolate in carefully. 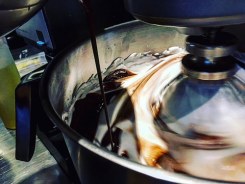 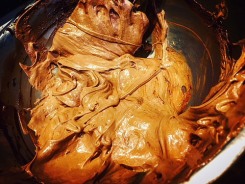 Footnote: Online most of these recipes are calling for a pinch of cream of tartar. Well, we don’t have this *oldscool* stuff in the restaurant. Instead of — was replacing it with a pinch of xantan gum. Whohohohooooooo = absolut craziness. I ended up having a real vegan chocolate marshmellow. I am telling u #very cool #very awesome. I saved some of this mix in the fridge – a couple of hours later when the chocolate got back to solid by cooling down the temperature the marshmellow became a real #spoonable #superairy #superlight chocolate mousse. Real #chocolateporn.

Recently i changed our rhubarb dessert. Having a gluten free delishhhhh black olive cake recipe i wanted to use. It’s a great little almond sponge: when u whipp the eggs with sugar, after tripled its size u add your tapenade (olive puree with super nice olive oil) and finally fold your ground almonds with lemon zest and lots of love. U see – cause the whole process starts with whipping a whole egg meringue i was thinking to try this with aquafaba. We never know, right?

So i did whipp the aquafaba, then fold the tapenade finally the almonds. The whole mixture was looking great at this point when it slipped in the oven. Usually i bake this cake for 25-30 minutes. Everything was looking great ( footnote: obviously this ceremony happened during service time so the door of the oven was opening and closing continuously). After 20minutes the cake collapsed. From a lovely 4cm high went down to 1cm. It wasnt ready anyway so i left in another 5minutes. Then i took out and let it chill. It was no cake. I ended up making the best almond & black olive crumble ever. Was no structure and absolutely no bond between the ingredients, nothing to hold the sponge shape together. However… was still f😁ckin tasty. Lesson learned= i cant leave out eggs and gluten in the same time. *no pictures from this test sorrrrrry 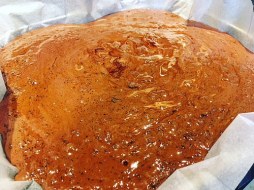 Last but never the least. The brownie. I jumped in it thinking the the cake was not successful but in this case we ll have chocolate and flour to maintain the structure of the mixture. I was hoping a lot – i wanted to surprise the staff in this very busy (double) Saturday service.

I found a good looking recipe online what i modified a bit and here we go. Let’s dance.

Starting the same way how we did with the chocolate mousse but at the end u fold in your dry mix (flour, baking powder, instant coffee, nibs n salt). Goes in the oven – looking fabulous. I usually baking my brownies for 25minutes and after checking in every 5. Same thing happened here. But between 25-30 the batter collapsed again. Not totally, and not on the sides just in the middle. I baked for another 5minutes and took out, it looked nicely cracked and started to burn on the corner sides. I let it chill in the fridge.

Flavour is absolutely beautiful. Yummy yummy. The thicker corners hold more than the juicy middle part, which kind of “fallin apart”. Basically this brownie is acting like a freshly baked still warm brownie which just coming out from the oven. Fallin into pieces and break into apart as u try to cut. Only because it has no tonns and tonns of butter which would set cold again in the fridge – this “cake” won’t be harder. Will always stay crumbly.

Overall opinion? These were just the very first experiences and experiments with ‘aquafaba’. And I’m kind of enjoying the brainstorming for more possibilities. #lovemyjob