Where can i start? … hm… MALLORCA. Es una isla maraviliosa… just like my spanish knowledge…  nice weather, nice people, nice landscape and nice food, yesssssssssss… the food is amazing of course. Would be really hard to introduce the whole wide range of stuff available here (most of them coming from the mainland, so pretty much spanish and thats it :)) So lets just go step by step giving company to my imagination…

I guess i need to start really down. Down the sea.. This is the biggest and most unbelievable change i realized arriving from Brighton. Ok, lets make it clear: in Hungary we have no sea or ocean. Which means i can count the types of the fish we have in the lakes and rivers in my two hands with my 10 fingers. Not really much more. Couple of turtles and frogs from the swamp but thats it. So i had a really ‘local knowledge’ of seafood 5 years ago before i had left my country to the Island United Kingdom. With water everywhere. U can imagination. Fish i never ever could even imagine not talking about touching or eating them,.

For example all the flat fish with both eyes in the same side… was just shocking and funny. After some years living there and working in a couple of seafood restaurant i was thinking i am the queen of the ocean. HeHeHeHe… knowing the names of thousands of fish and other little slimy creatures, knowing how to prep and what to serve with them in which season of the year. Killed and cooked uncountable crabs and lobsters, opened and murdered millions of oyters, clams, mussels and whelks, winkles… there, in the cold, windy and rainy England. From the quite cold ocean. YES.

Icy water with rocky coast means one thing: plenty of oyters… we just named them after the origin place like Jersey, Rock, Native, Irish rock etc etc… i was never really keen on the magic of this little slimy thing (especially cause i have never ever found a single fucking pearl in any of them even if i opened thousands and thousands…) but i could push it down to my throat with some bloody mary, passion friut or daikon-wafu dressing. I do have a bad memory: at my “Champagne and Oyster Bar” was opening hundreds in every service… after a couple of weeks i realized that i see the ‘soul’ of the oyster flying up to the heaven… u might think i smoked too much – but i did see little tiny clouds disappearing in the air coming from the shell i had just broken. Ok, if u want u can call it fog, damp, fume…. maybe the best word i can use is the dew, like a tear drop when a little creature has to die and board down to a posh persons throat. Gr………………… no me gusta….. :( 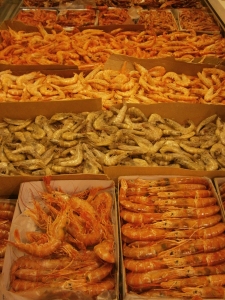 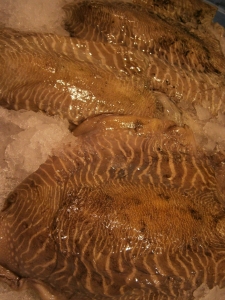 But now… this water is warm. This is the Mediterranean Sea. So…. a total new story. A new page of Darwin’s Book.

First i was a bit scared because i was reading a lot about the fish being frozen here… this is just not true. It can be possible to ‘export’ them from the mainland – but still fresh. Fresh??? ALIVE!!!!

The best thing is that i can discover a new little market every day. There are so many of them almost in every corner – a bit hidden, not for tourist but for the local people. Who actually has got a kitchen and the knowledge how to prep these beauties. For me its pretty hard again – like it was in England at first time: learning all the names without knowing them in my native language. Probably most of them are not exist in a hungarian dictionary. Heh… what a surprise. So i need to memorize them in english first.

So… big market. And cheap. Really cheap. Probably a portion of vegetable can cost more. This is the reason why all the tapas bars are full with tapita from the sea. I think i have a big luck here: my favorite bit – which is the baby squid – is the cheapest. But u have the giant version as well just like the relative cuttlefish or octopus (alive or cooked if u wish). The whelks look much more elegant here with the type of shell u would buy as a jewelry. Have not seen any oyters (guess the temperature is too nice for them) but seen the good old cold water Atlantic Lobster with a new friend, the new Mediterranean Spiny Lobster. Next to them resting plenty of baby crabs (normal and blue ones as well). Tonnes of mussles and clams hanging in baskets. And if its still not enough…. fish are funny and soooo colorful!!! I have tried just a few, like blackfaced blenny, flying gurnard, madeira rockfish, golden gobby but there is much more… fresh bonito and shark big as me, tonnes of ‘rubish’ fish like blue whiting and sardines not to mention the biggest umami source: fresh anchovies, pickled anchovies, anchovies in marintade…. just like heaven for me who loves fish as much to eat this all day, every day (fact: in Hungary one person eats 4 kilo of fish in one year… i think we do 100-120kg…. more or less… :))) 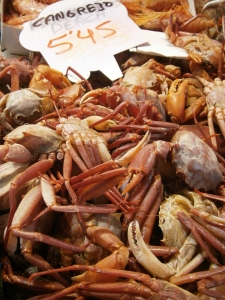 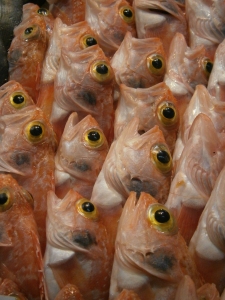 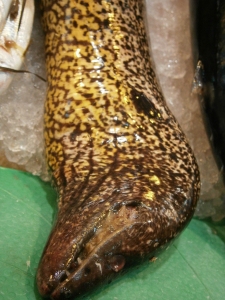 By the way, does anyone know any muarena recipe? I would appreciate it! Just to try… after the shark’s fin soup… heh. (this was a joke – i know sharks are in danger and i love animals).

I must close this chapter with a couple of recipes i guess… but however i was searching to show u a secret: there is no. Most of the mallorquin dishes made with meat (pork), anything with seafood coming from the mainland. (here is one quite complicated – i am not sure if its really local, cause i never even heard of it…. mallorquin fish)

Here they do not f8cking around with the food too much. I mean because here u can find so flavorful ingredients u dont need to use hundreds of them. Keep it simple and clear. For example: climate is perfect for the vegetables. People dont mind to spend a whole day making a homemade tomato sauce. But after just chuck a piece of cod in it and bake in the oven, ready in ten minutes ( Bacalao en salsa de tomate ). Or they love garlic (having ali-oli with everything, especially with plenty of artichokes) and simply just fry prawns in a pan with garlic and herbs. Same story with the squid or octopus: quality olive oil, seasalt, lemon and parika. Done.

—footnote here: my big favorite as i mentioned before is the baby squid and the baby fish (boquerones). BUT: i would never have this as a tapas because…. people a bit too lazy here and they just skip the proccess of cleaning. Last time i bought two handful of baby squid and took me like 45 minutes to clean them properly. It was my choice…. so while u are chewing… just dont be surprise if u gonna find some crunchy bits where u should not…