Now this is a post that has hardly anything to do with food, but because there is some photography involved at least, I thought, why not to share?

Beside the thinking I’ve been doing recently about light and shadow, light and lack of light, and so on, mostly in a photography-related way (it would bore everybody to death – and I don’t want no-one to suffer so I’ll kindly save the pro-shit and technical details, if anyone is interested, feel free to ask), the entire Twin Peaks has been watched and it did make a huge influence on me, being a most sensitive soul. Special Agent Cooper is one of the sexiest men living on this planet, and he is not just a fatally attractive creature, but a wine-lover, too… Oh boy, I have to admit: I have this thing for wine-lovers… <3    mmm…   anyway, Agent Cooper had so many visions and dreams while investigating the murder of Laura Palmer, that it made me want one myself.

So I set up the tripod in front of the big sitting-box in the living room, and using the remote shutter I took a reference picture in autofocus (and aperture-priority) mode whilst sitting in front of the camera, to adjust the frame and focus. After the photo was done, I switched to manual focus, making sure I do not touch the focus ring on the lens. Also, I switched to bulb-mode, which allow me to keep the camera’s shutter open as long as I want. Thanks god the batteries were charged for the flashgun – usually this is the moment in my life’s timeline when I realize that they’re dead… :S

When everything was set up, I switched off all the lights in the room, so it was completely dark, just as dark as the wandering soul Bob, who shall be cursed forever for occupying Leland’s body, making him rape and brutally kill his only one daughter, Laura.

So, I’m sitting on the box in the living room, the darkness surrounds me. I took several deep breaths, to clear my mind and started to repetitively murmur “Fire, walk with me!” in a very deep and calming tone. Slowly the room changed around me: somehow reality vanished and a very sensual, warm something filled the air. Getting lost in peace and love around, I involuntarily opened up the shutter of the camera by holding the button on the remote pressed long. The sound of the shutter scared me a little bit so I dropped the remote. I held the flashgun in my other hand, and againg, accidentally I pressed the on/off button, so the flash went off for a fragment of a second… for such a short time… and it was just enough to make the wonder happen … I could see myself manifesting right next to me on the big, old wooden box in the living room.

The time stopped for a short while, and I was sitting there, face to face with myself… I reached my arm and tried to touch my own face. I mean, my other self’s face… I saw her doing the same to me… the most wonderful moment in life, caressing the very loved one… it was just beyond imagination!

…and that was the moment when the flashgun fired again, making the other Marti disappear just as quickly as she appeared. I shook my head and noticed the remote controller on the floor. I lift it and pressed the button again, and that closed the camera’s shutter: the picture-creating process came to the end.

My heart nearly jumped out of it’s case when I saw the photograph: 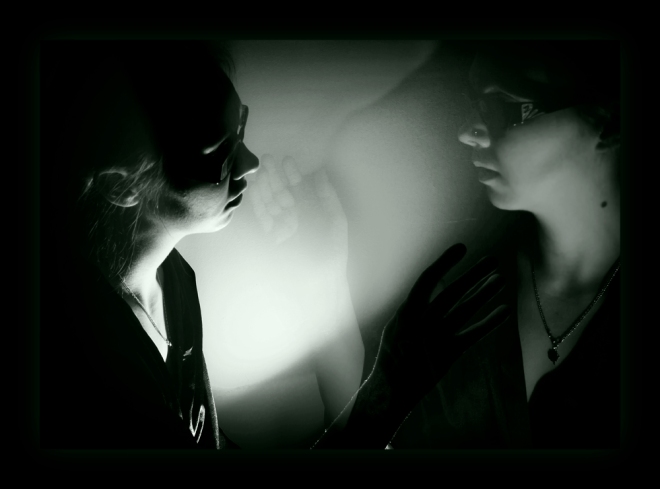